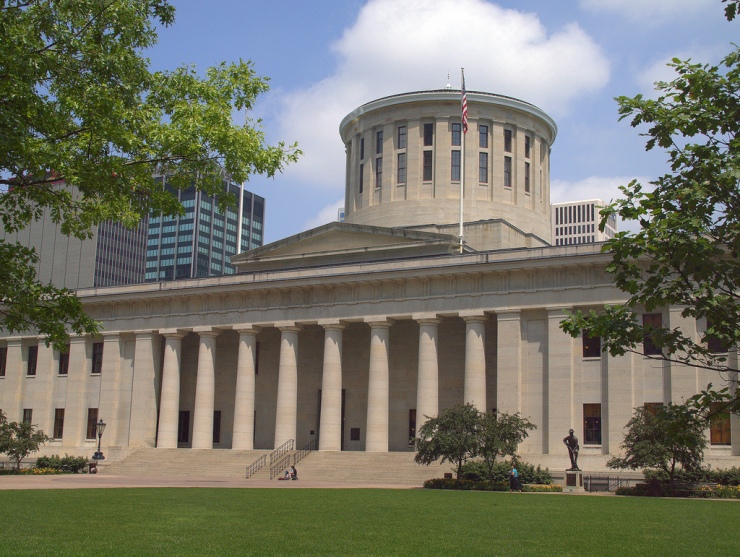 After I had written about HB 176, introduced into the Ohio House of Representatives in early April, I was informed there was a second bill. HB 181 was introduced five days after HB 176, It is sponsored by State Representatives Ron Hood (R-Ashville) and Thomas Brinkman (R-Mt. Lookout) and has 13 co-sponsors.

You can read the text here.

In my opinion, this is a weaker bill. There is some great language. For instance, it bans the use of PARCC and Smarter Balanced:

It prohibits officials from tying the state to any memorandum that would tie the state’s hands.

No official or board of this state, whether appointed or elected, shall enter into any agreement or memorandum of understanding with any federal or private entity that would require the state to cede any measure of control over the development, adoption, or revision of academic content standards.

Regarding academic standards, the bill says: “The state board shall not adopt academic content standards that are developed at the national level or by a multistate consortium.”

Here are the weaknesses of this particular bill compared to HB 176:

Is it better than nothing? Yes if they implement HB 181 in good faith. I have yet to see a state board or department of education operate in good faith when academic standards reviews are concerned. I should also note that HB 176 has twice the number of co-sponsors that HB 181 has. I would recommend that the Ohio House pass the stronger bill.

State Representative Andy Thompson (R-Marietta) introduced HB 176, a bill that would repeal Common Core in Ohio, earlier this month. Download the text of the bill (as introduced) here. The bill currently has 26 co-sponsors in the Ohio House.

The bill analysis of HB 176 summarizes the legislation, as it relates to academic standards and assessments, this way:

The Columbus Dispatch reports last week that the Ohio House overwhelmingly passed a bill that would eliminate PARCC and restrict the amount of testing done in the state.

A wide-ranging bill that would eliminate the Partnership for Assessment of Readiness for College and Careers (PARCC) tests in Ohio and limit state achievement tests to three hours per year passed the House 92-1 on Wednesday.

“Clearly, the implementation of PARCC assessments are not going well and need to be replaced,” said Rep. Andrew Brenner, R-Powell. He sponsored House Bill 74, which also reduces the number of end-of-course exams that high-school students must take and blocks the PARCC consortium from submitting a proposal for replacement tests.

Brenner said his bill overlaps in some areas with the 30-member Senate Advisory Committee on Testing, which issued recommendations two weeks ago, including the scaling back of new twice-a-year tests to once a year. The Kasich administration also has recommended reducing testing times.

The House bill has some good components, said Sen. Peggy Lehner, R-Kettering, but it also contains provisions that are premature and could threaten $750 million in annual federal education funding. The federal government requires the state to assess students in English/language arts and math in grades 3-8 and again in high school.

“Some of the ways they’ve described how testing could be limited would be in direct violation of federal requirements,” Lehner said of the House bill. “We could end up with a test that doesn’t do what needs to be done.”

Update: Heidi Huber of Ohioans Against Common Core is not excited about this bill, she told me on Facebook:

All you have to do is look at the sponsor name. The lone dissenting vote was Andy Thompson, the only stalwart in our Ohio fight. The bill is not as described. Ruse #6 I believe in the Brenner series. As an example; an amendment that prohibits only a consortium assessment that was funded by ARRA. Classic. Brenner himself said the bill does nothing, but that won’t keep them from touting they killed PARCC. The federal mandate still exists and the standards are still in place. Nothing to see here but more kabuki theater. The kids be damned, there’s profit to be had.

House Bill 597, a Common Core repeal bill, passed out of the Ohio House Rules Committee on a 7-2 vote.

House Bill 597 would eliminate math and English/language arts standards and replace them for three years with standards from Massachusetts that were in place before that state adopted Common Core. New state standards would be put in place by the 2018-19 school year.

The House Rules Committee, which was selected and organized to help get the bill passed, voted 7-2 to pass the bill. House Minority Leader Tracy Heard, D-Columbus, was among the two Democrats to vote against it, and Speaker William G. Batchelder, R-Medina, voted for it.

Rep. Matt Huffman, R-Lima, a prime sponsor of the bill, said it would get a full House vote if leaders are certain they have 50 votes to pass it – something they do not have right now. He said the standards did not get a proper vetting when Ohio first adopted the standards in 2010 and began working toward full implementation this year.

Huffman said he has seen support grow on bills in the past, so he’s thinks there is still a chance for it to pass the House.

This week the Columbus Dispatch released a poll that shows the Common Core has little support among Ohio voters.  The poll of 1,185 registered voters has a +/- margin of error of 2.7 %.

They asked the question of those surveyed, “from what you know, do you support or oppose the Common Core educational standards being implemented in Ohio.”

Ohio is home to the Thomas B. Fordham Foundation who have been avid promoters of the Common Core State Standards.  Obviously they are incredibly effective in their own home state.

There is a bill, HB 597,  before the Ohio House Rules & Reference Committee.  Jim Stergios of the Pioneer Institute recently wrote that the bill represents a “smart exit strategy.”

Learning from Indiana’s disastrous effort and the good efforts in Oklahoma and South Carolina, Ohio’s HB597 is a huge step forward in that it not only rejects Common Core’s mediocre offerings, but it provides on an interim basis Massachusetts’ nation-leading standards as the new foundation to draft off of in developing new Ohio standards.  The Massachusetts’ standards go into place for two years as Ohio educators, businesses, scholars and parents put their heads together in a truly public process—and develop, we hope, even better standards than what Massachusetts had.

But will Ohio Governor John Kasich listen to not only the poll, but this reasonable approach to exit from the Common Core?

It appears that he remains tone deaf and he said earlier this month doesn’t expect a repeal bill.

In a meeting yesterday with the Dispatch editorial board, Kasich was asked about the effort by some Republican legislative leaders to repeal the Common Core education standards for math and English/language arts, along with Ohio’s other standards and tests.

“I don’t know that there’s any effort to repeal Common Core,” he said. “There may be an effort to talk about it.”

Kasich has said he supports the Common Core standards, adopted by Ohio and more than 40 other states in 2010 after they were developed by the National Governors Association and the Council of Chief State School Officers as a way to boost college and career readiness among U.S. students.

“I wish we could just change the name to Ohio’s standards, or whatever,” Kasich said.

It appears that he thinks just a rebranding will do.  Governor Kasich, Ohioans do not agree.

The goal is to pass the bill one week after the November election, when the House reconvenes after breaking in early June, Huffman said.

“Speaker (William G.) Batchelder wanted to make clear … and I want to make clear the leadership in the House supports the repeal of these Common Core standards with the substitution of high standards and getting the federal government out of the business of education,” (State Representative Matt) Huffman said.

Rep. Andrew Thompson, R-Marietta, who has led the push to repeal Common Core in Ohio, said they are looking at other states with “proven standards” such as Massachusetts.

“We want to look at standards that are tested, proven and effective,” he said, calling it “ creepy” the way Common Core came to Ohio.

Ohioans Against Common Core recapped the process laid out by State Representative Huffman.

Heidi Huber of Ohioans Against Common Core released a statement that was read during a press conference held.

As leader of Ohioans Against Common Core, I welcome the path outlined today by Speaker Pro Tempore, Matt Huffman, to prioritize legislation he has jointly sponsored with Representative Andy Thompson that will advance Ohio’s Common Core repeal effort.

Ohio parents, concerned teachers and citizens have worked tirelessly since early 2013 educating friends, neighbors and communities about the dire consequences of Common Core – chief among these, the destruction of local control. The process detailed today for Ohio’s new repeal legislation is clear validation of the intensifying concerns surrounding Common Core and acknowledges the efforts of Ohio citizens to protect their parental authority in public education.

Representative Thompson’s new bill will thoroughly address the complexities involved with an effective, comprehensive repeal of Common Core. This new legislation will build upon Sub HB237 and address issues such as:

Ohioans Against Common Core wishes to recognize both Rep. Andy Thompson’s unwavering efforts to fight the battle against Common Core, and Rep. John Adams’ draft and circulation of the Discharge Petition. Their efforts have advanced our cause to protect Ohio’s children, parents and education system from the imminent centralization and nationalization of public education that is the Common Core State Standards initiative.

We look forward to partnering with our Representatives and House leadership to bring this new bill to a vote on the House floor, giving every Ohioan the ability to help restore the educational autonomy of their state.

Update: Governor John Kasich is on the record about the bill.  The Columbus Dispatch reports “I share the concern about loss of local control.  That’s why we took actions in the MBR to address some of those.  If there are more things that need to be done and we’re seeing an erosion of local control, then we’d have to address it. Their concern is who’s in control of the schools? And I’m always concerned about that.”

He was also asked if he was reconsidering his support of Common Core and he replied, “no I’m not saying that at all.”

He then stated, “let them have their hearings and we’ll see what all of this is.”

How generous of him.  It’s going to be an uphill climb in Ohio.

From Ohioans Against Common Core:

The calls worked! Tonight on the House floor, we witnessed the power of the individual – dedicated to the cause of liberty – bear fruit. Our just days old Action Item has been executed and won. The House voted affirmatively on an amendment to the budget removing the PARCC assessment references.

According to our sources, Ohio legislators have been wondering what in the heck all of your “Common Core” calls have been about lately; namely because many still don’t know what is, and how their fingerprints are or could be on it…

Some Ohio House members are reportedly taking a very close look at HB 59 (Kasich’s budget) to make sure it doesn’t further entrench Common Core before they fully understand what it is, and hopefully before they walk it back.

Read the rest as they gives some good background on how Ohio adopted the Common Core.