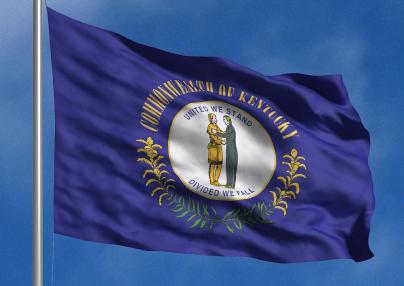 But, while questions remain about the accuracy of Kentucky’s new Common Core tests, known as the Kentucky Performance Rating for Education Progress, or KPREP tests, the state has other college readiness test data available from far better established assessments from the ACT, Inc. Those other college readiness tests include the actual ACT college entrance test, given to all of the state’s 11th grade students, and two other tests known as EXPLORE, given to all Kentucky eighth grade students, and PLAN, which is given to all of the state’s 10th graders.

EXPLORE and PLAN have been in use in Kentucky since the 2006-07 school year. Statewide use of the ACT came on line several years thereafter.

Like the ACT, the EXPLORE and PLAN also offer Readiness Benchmark Scores, which are linked to actual college readiness data from the ACT college entrance test. Meeting EXPLORE or PLAN Benchmarks provides a good indication that students as of the eighth grade or tenth grade are progressing on track to eventually be college ready.

Obviously, if Common Core is working in Kentucky, scores on valid college readiness tests like EXPLORE and PLAN should be increasing.

But, that’s not happening.

This graph shows the percentages of Kentucky students that met or exceeded the EXPLORE Benchmark Scores in English, math, reading and science over the years that Kentucky administered this assessment statewide. The recent trends since the onset of Common Core around 2011-12 don’t look good. 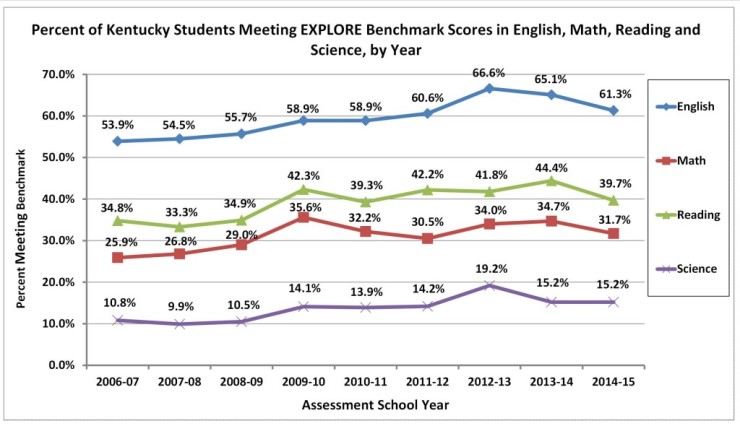 The 2014-15 school year results for Common Core subjects of English, math and reading are all uniformly lower than in several previous years. For example:

English has been in steady decline for the past two years.

Reading performance is notably lower now than last year and actually is also lower than results for all but one year since 2009-10, as well.

Math performance also dropped from 2013-14 and with only one exception, the 2014-15 math Benchmark performance is worse than the performance in any of the previous five years.

These decays in performance in Common Core subjects raise concerns about the true functioning of Common Core in the Bluegrass State. The latest scores from the 2014-15 term are for the fourth year of full Common Core operation in Kentucky and the state’s education program should be stabilizing. We should not see such decay on a true college readiness test if Common Core is really working in Kentucky. However, the graph above indicates that at the eighth grade level, at least, Common Core in Kentucky has a problem.

Things only looks slightly better for Common Core in the PLAN results. While math has shown some improvement, both English and reading scores also decayed in the 2014-15 school term.

By the way, science isn’t specifically covered by Common Core although Common Core materials do include reading suggestions for the subject. However, Kentucky has not performed well on EXPLORE science in the past two years, either. The state’s best science performance was posted by the eighth grade class of 2012-13, two years earlier. There was a notable, 4-point drop in the percentage of Kentucky students meeting the science benchmark between 2012-13 and the newest results. PLAN science has been essentially flat since Kentucky’s Common Core testing with KPREP started in 2011-12, as well.

Unfortunately, except for English, disturbingly low percentages of Kentucky’s students meet the EXPLORE and PLAN Benchmarks. With its low current Benchmark Scores, Kentucky needs to be making lots of improvement in all tested subject areas, but that clearly isn’t happening, at least so far, in Kentucky’s Common Core era.

Excel Files for Kentucky’s EXPLORE and PLAN Benchmark results are available in the “Assessment” section on the Kentucky Department of Education’s “Supplemental Data” web page.

6 thoughts on “Common Core Has Improved College Readiness in Kentucky?”