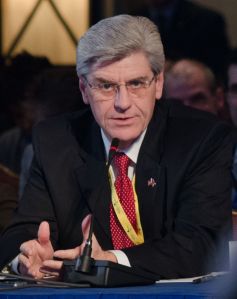 Mississippi Governor Phil Bryant vetoed SB 2161 on Friday last week.  The bill passed through the Mississippi Legislature in late March.   Bryant said then that he wasn’t sure the bill would accomplish anything.  Activists from Mississippi told Truth in American Education that they believed the bill would just set up a rebrand and give politicians cover.

Ok, the ball is in the Governor’s court to act, we’ll be watching to see what he does.  Activists were urging him to veto the bill so it’s encouraging to see he was responsive to that.  I’m curious what the next step may be as I was leery of vetoing the only bill on the table that could have made some positive changes.  Then again the state could have just ended up with a rebrand they are stuck with for years.  Like I said in my previous piece on this bill, activists on the ground know best about the players and the process.